The buyer urgency created by constant housing news coverage and ever-changing housing payments from rising rates is unmistakable. Last week, the Federal Reserve raised short-term rates for the second time in 2018. And, while we’ve mentioned time and time again that it is important to pay attention to Fed policy, it is also critical to remember the relationship between mortgage rates and 10-year Treasury yields. Luckily, after crossing the feared 3% threshold at the end of April, yields continue to be range-bound between 2.8% and 3.0%. This has helped stabilize mortgage rates, which currently sit around 4.6%. Our Director of Economic Research, Ali Wolf, wanted to understand how sales activity across the country has responded to higher rates and dug into Zonda to find the answer.

We pulled contract sales data to see the biggest year-to-date winners of 2018, which include Denver, San Diego, and Phoenix. 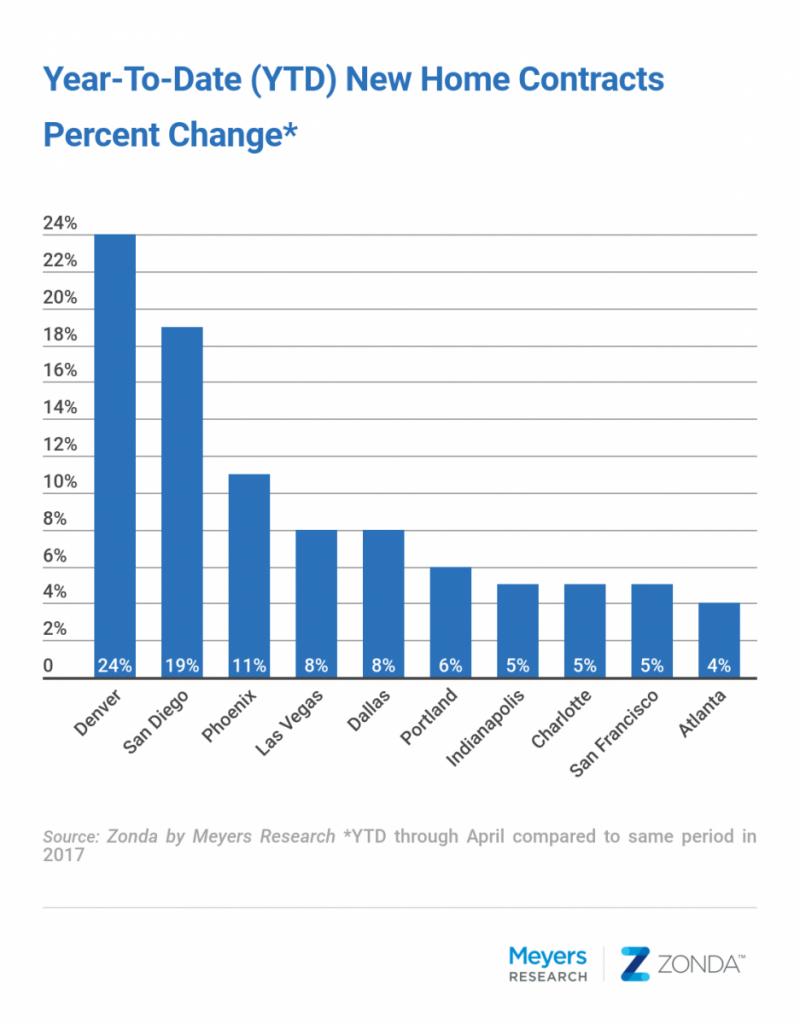 DENVER’S MOMENTUM PERSISTS
Coming in at number one for the greatest growth in sales is Denver. This market has dominated news cycles for its rapidly changing fundamentals. When looking at affordability, we like to break markets into different categories. In 2010, Denver was bucketed with the moderately affordable markets like Raleigh and Atlanta. Today, the metro now falls under the least affordable category, playing in the same league as Seattle, Miami, and Los Angeles. Denver new home closing prices grew 42% from 2012 to 2017, reaching just under $500,000. This is all while the median household income is just over $75,000 and the current unemployment rate is 2.8%.
“In metro Denver/Boulder, April year-to-date sales over $400K were up roughly 13%, while contracts for homes priced under $400K grew 41%. We will watch to see if rising rates shift demand more towards lower priced homes,” explains our Senior Vice President of Advisory and Denver expert, Mike Rinner.
Jeff Whiton, the CEO of the Home Builders Association of Metro Denver, notes that builders are scrambling for higher density product. He explains, “Single-family attached starts are up 35% in the first third of the year, and I expect that trend to continue.”
Even as fundamentals change, sales in Denver are strong. Like most markets, sales historically pick up during the spring selling season, but in Denver, the spike was nearly 30% this year. The top builders in Denver are currently Richmond American Homes, Lennar, and Clayton Properties Group, who collectively make up roughly 35% of the market. Don’t be surprised to see the seasonal slowdown in the May and June data. In 2016, the average sales pace slipped 13% from April to June and dropped 27% during the same months in 2017.

Our latest feature in Zonda lets you instantly visualize a heat map of the average new home sales rate by market. We pulled Denver to understand submarket strength, and found that Adams County has the best sales rate in the metro area. The aforementioned top builders for the metro are also quite active in Adams County. The best-selling project is Carriage House at Riverdale by Oakwood Homes, where clustered single-family detached homes start at $340,000. 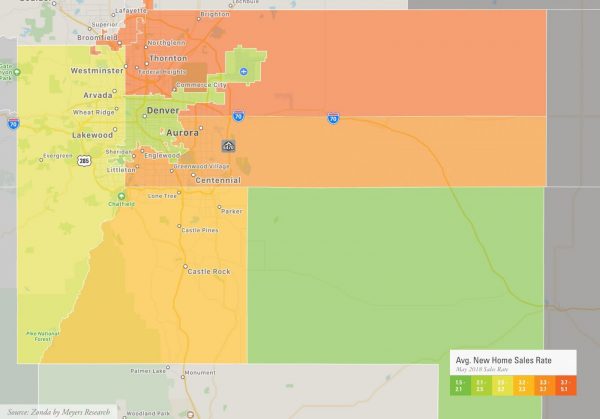 We analyzed contract sales by market in absolute terms and found that Dallas leads the nation with the most year-to-date contracts, followed by Houston and Phoenix. Please let us know if you’d like to see the full list.
Ali Wolf, Director of Economic Research
Posted in Industry Articles
Scroll To Top