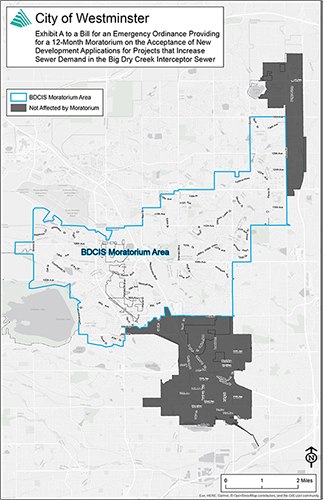 A Westminster sewage collection network in so overtaxed and outdated, the City Council has enacted a year-long moratorium on new development that would feed into it.

The health and well-being of city residents is believed to be at stake.

The 22-mile-long Big Dry Creek Interceptor Sewer system collects sewage and wastewater from about two-thirds of the city of more than 110,000 people. It serves nearly all of Westminster north of West 92nd Avenue and south of 124th Avenue.

After being briefed about the sewer’s capacity, age and condition issues last week, the City Council on Monday night unanimously adopted an emergency ordinance that freezes acceptance of new, large-scale development proposals in the area served by the Big Dry Creek network for up to a year.

“The (sewer) system is now at a trigger point of risk that warrants both near-term mitigation measures, as well as longer-term expansion to support continued development,” a staff memo recommending the emergency ordinance read. “Not addressing these system constraints is believed to compromise the health, safety, and welfare of the community with a level of risk that is not acceptable.”

The moratorium, which went into effect at noon on Tuesday, is designed to allow a consultant to inspect the sewer, collecting information that will be put to use in a project to fix, expand and replace portions of it, according to a city memo. City staff are expected to work simultaneously to pinpoint spots for where incremental or innovative fixes could be employed and make plans for easements and land acquisitions that might be required by future repair and replace projects. One idea floated at Monday’s meeting was reactivating decommissioned sewer lines in the area to help with capacity.  Read the rest of the article by Joe Rubino | The Denver Post