Homes will soon rise in Stapleton’s 12th and final neighborhood, marking the beginning of the end of a two-decade boom for single-family home construction in Denver. 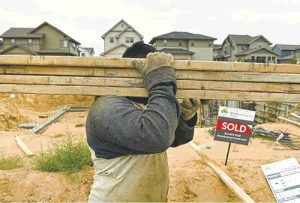 A workman carries planks of wood for a house while working on new homes in the Beeler Park neighborhood of Stapleton on Wednesday. Photos by Helen H. Richardson, The Denver Post

Developer Forest City is about to release the first of 1,300 single-family lots just south of the Rocky Mountain Arsenal National Wildlife Refuge on land that once hosted the northern runways of Stapleton International Airport.

Workers with heavy equipment have been busy grading dirt, putting in roads and installing water and sewer infrastructure on land north of 56th Avenue, west of Havana street and east of Dallas Street.

A construction wave that started with Stapleton’s South End neighborhood in 2001 will bookend with the North End neighborhood. Once the last home on the last street is sold, probably some time in 2021, only commercial lots will be left.

“Depending on the strength of the demand for market-rate housing, North End could be built out in approximately three years,” predicted Forest City Stapleton spokesman Tom Gleason.

Lowry, a redeveloped military base south of Stapleton, is selling out its last few new homes. Green Valley Ranch to the north has a couple of hundred more lots available within Denver boundaries than Stapleton does, but completion there, too, is a matter of time.

“We have somewhere in the neighborhood of 1,500 homes that we have yet to build on the Denver side,” said Pat Hamill, chairman and CEO of Oakwood Homes, the builder behind Green Valley Ranch. Read the full story by Aldo Svaldi, The Denver Post

Posted in Industry Articles, Members in the News
Scroll To Top