Skip to content
The home will be presented to the family on November 9, 2018, just in time for Veterans Day. 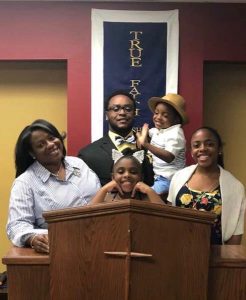 Meritage Homes Corporation (NYSE: MTH) and Operation Homefront announced late Wednesday that a military family has been selected to enter the Homes on the Homefront (HOTH) program and will receive a brand new, energy-efficient, mortgage-free home in Commerce City, Colo. The home will be presented to the family on November 9, 2018, just in time for Veterans Day.
U.S. Army veteran and two-time Purple Heart recipient Herbert Jackson, his wife Erica, and their three children will receive a 1,837-square-foot home from Meritage Homes. This three-bedroom, two-bathroom home will give this family the opportunity to establish a newfound sense of stability, community involvement, and enjoy the tremendous pride of homeownership.
“This new home will actually make a huge difference,” said Jackson. “It will definitely help us financially, and will also allow us more room to focus on paying down debt, including earlier student loans. We are so grateful for the opportunity to move toward a stronger, more stable and secure future.”
Born and raised in Memphis, Tennessee, Jackson enlisted in the Army in 2006 and rose to the rank of sergeant, serving as an IT specialist. Jackson carried out multiple missions in Iraq and was honorably discharged in 2013 after suffering from a traumatic brain injury, post-traumatic stress and injuries sustained in Iraq. After serving in the Army for seven years, Jackson is eager to establish roots in Commerce City.
The single-story home will include the M.Connected Home™ Automation Suite, a two-car garage, private study/flex room and a covered outdoor living area. It will also come with an array of money-saving features, such as ENERGY STAR® appliances, spray-foam insulation and energy-efficient windows, which can cut heating and cooling costs by as much as 50 percent.

“For the past six years, Meritage Homes and our team of generous partners have been committed to supporting Operation Homefront in building strong, stable and secure military families,” said Steve Hilton, CEO of Meritage Homes. “We are deeply grateful to the brave men and women fighting for our country, and are humbled to welcome the Jackson family to their new, energy-efficient home as they begin the next chapter of their lives together.”  Read the full story

Posted in General HBA Info, Members in the News
Scroll To Top