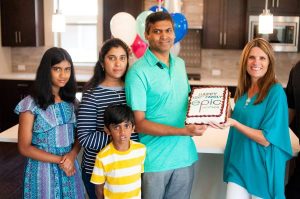 When she started Epic Homes in 2015, Presley sought to create a home building company unlike any other in the industry.

“One of my main goals for Epic is that people can feel the difference with us,” Presley said. “Your home should be where you can fulfill the experiences that mean something special and unique, and we work with our buyers to create just that.”

Presley said this principle has been at the forefront of every executive decision she’s made for the company. Breaking ground in Oct. 2015, Epic Homes’ debut community was Leyden Rock, an Arvada-based development.

“After all the work of getting the business started, I was so excited to begin building in a community,” Presley said. “It was also reassuring and encouraging to see how people responded to the uniqueness of our homes.”

“We really found our stride at Leyden Rock, so when it came time to start building in Anthem, we were ready and excited,” Presley said. “As with every community, there were big hurdles to overcome. But in the end, we came together as a team, and it’s been amazing helping so many families build their dream home in such a great community.”

“I am so excited to be building in Anthem Reserve,” Presley said. “We have met so many amazing people, and I feel very blessed to continue in the Anthem community. The views from Anthem Reserve are unbeatable.”

Epic Homes also recently announced its next endeavor, Painted Prairie, an Aurora-based master-planned community. The homebuilder has developed an entirely new line of products for the development.

“I am so excited to unveil our Painted Prairie models in late November,” Presley said. “Our home designs are completely different from those in our other communities, and I think people are going to absolutely love what we’ve created.”

Epic Homes will announce five new home designs, three of which offer the option of an entirely additional floor — an option known as “Epic Elevated.” Two of the Epic Elevated plans feature a rooftop deck.

Back at Anthem Highlands, Ganny and Nalluri said they are beyond excited to move into their new home — one of Epic’s popular Pinnacle designs.

“Our experience with Epic Homes was excellent,” Ganny said. “We appreciate the willingness to help all along the process.”

With several other communities on the horizon, Epic Homes continues to gain momentum and renown in the Colorado home building industry, but that won’t stop Presley from keeping her main goals in focus.

“At the end of the day, it’s about the people,” Presley said. “Nothing makes me happier than helping people build the home of their dreams. I’ve been in this industry for a long time, and that’s always been my favorite part. It’s why I started Epic Homes, and it’s why I’ll continue it.”

Posted in Uncategorized
Scroll To Top