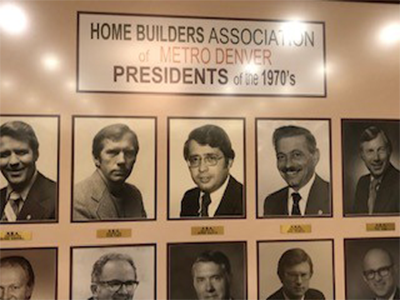 Photo of Wall of Presidents at HBA offices taken by Vern’s daughter Linda Purdy, who is currently serving on the HBA Board of Directors.

Vernon Purdy, age 83, died peacefully at his home in Englewood, CO on November 14, 2021. Mr. Purdy was suffering from the effects of advanced Alzheimer's disease when he passed.

Vern was born June 26, 1938, in Canandaigua, New York. He was raised on the family farm and later attended Rensselaer Polytechnic Institute, where he received both a bachelor's and a master's degree in Management Engineering. He served his country as a Captain in the United States Marine Corps from 1962 to 1964, then entered the corporate world as an advertising manager for Corning Glass Works.

Upon moving to Denver, CO in 1968, Mr. Purdy embarked on a successful career in real estate, working to develop and market the nascent Denver Technological Center, which has since flourished to become the largest and most important business development in the Denver area. He was a lobbyist for and, later, President of the Home Builders Association of Metro Denver, and was Founding Executive Vice President of the Colorado Association of Home Builders.   Read More

Posted in Members in the News
Scroll To Top